Druids Glen features prominently alongside the likes of the K Club, Mount Juliet, Carlow and Fota Island in every discussion of great inland golf courses. And while it’s purely a matter of opinion as to which is best, the important thing to remember is that there’s much more to Irish golf than its links courses. Druids Glen played host to the Irish Open Golf Championship from 1996 to 1999 and was voted European Golf Course of the year in 2000 at the prestigious Hertz International Travel Awards. It’s said that every great course produces great champions and Druids Glen is no different, having produced winners of the calibre of Montgomery and Garcia.

Steeped in history, Druids Glen owes its name to the pagan high priests, or druids, who worshipped in the forested Wicklow countryside in the 5th century. A druid’s altar at the 12th hole remains as proof of their inhabitation of the glen. Nestling between the Irish Sea and the Wicklow Mountains in an area known as the “Garden of Ireland” due to its impressive beauty, Druids Glen is both technically demanding and visually appealing. Often referred to as the “Augusta of Europe”, the course has won high praise from many leading professionals and presents eighteen challenging holes, many of them making impressive use of water hazards. Set in 400 acres of gently rolling wooded countryside, right from the off, it is apparent that Druids Glen is something special.

It’s always hard to pick the best holes on a course of this quality but some that do stand out on the front nine include the 6th and 8th. Rated as the second most difficult hole, the long uphill par four 6th requires a big drive to reach the green in two, and with trouble lurking to the right, the advice is to err to the left of the fairway. The par three 8th is a fairly short but picturesque hole, with water to the front and left of a sloping green. And, as is the tendency, if you miss the green to the right, a testing downhill pitch is required. The homeward journey boasts some superb holes including the par four 13th, par three 17th and par four 18th. Rated as the most difficult on the course, the 13th is a magnificent hole, which plays from an elevated tee to a fairway lined by a stream on the right and woodland to the left, while great bravery is required to take on the green with your second shot, which must be played over an expanse of water. The par three 17th requires a long iron or wood to an island green protected front and back by bunkers and is the type of hole where bunker is a result. The closing hole is one of the finest in Ireland and requires a long accurate drive to allow contemplation of reaching the target in two. Otherwise just lay up and trust your wedge prowess. 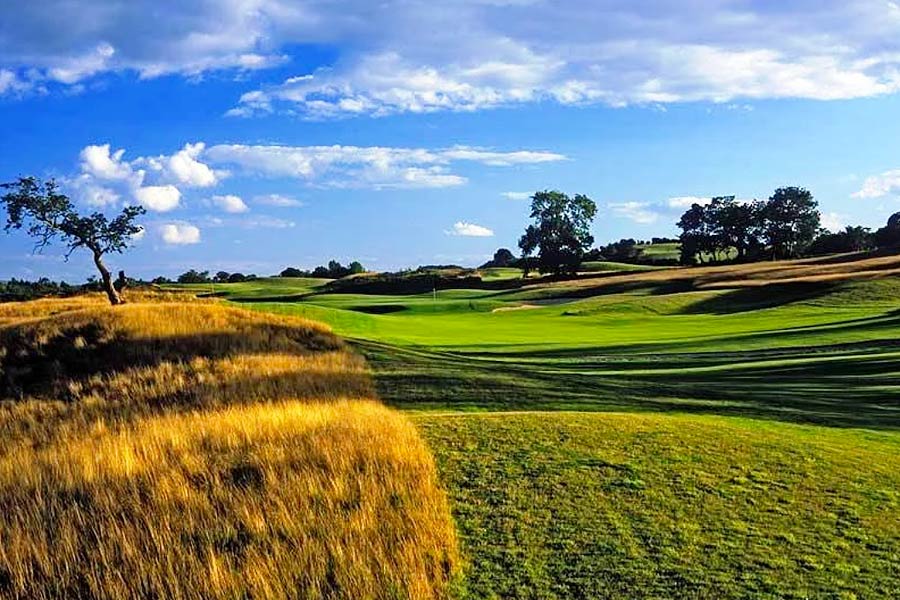 “Well, our trip was so great that I don’t even know where to begin! Our guide, Susan Ward, was absolutely wonderful! She was professional, funny, and shared so much information with us! I probably sound like I’m babbling, but it’s just so hard to put into words how great the trip was. My family and I have always wanted to go Ireland, and this trip was better than we anticipated. Between our itinerary and Susan’s expert knowledge of everything Irish—you helped create a spectacular trip for us. Everyone in my family will be sure to spread the word that O’Shea Travel is the way to travel!”