One of the oldest golf clubs in Ireland, Lahinch Golf Club is also one of the most respected links courses in the world. Set right on the Atlantic coastline, Lahinch is exposed to the ocean through all her moods and has been moulded and shaped over the centuries by nature’s harsh elements and an occasional touch of human genius. Lahinch, with its towering sand dunes, undulating fairways, rolling greens and fair share of blind shots, is the perfect natural golfing terrain a true links in the traditional meaning of the word.

As with most links with roots in the 19th century, Lahinch boasts an interesting history. In March 1892, two prominent members of Limerick Golf Club travelled to the west coast of Clare following a rumour that somewhere between Ennistymon and Miltown Malbay, there was suitable ground upon which to build a golf course. The end result was the development of a ten hole layout and the first game of golf was played at Lahinch in April 1892. Two years later, Old Tom Morris was invited to Lahinch to examine the course. Having surveyed the terrain, Morris was deeply impressed and he insisted that when the proposed changes were carried out that Lahinch would be on a par with the five best links of the United Kingdom. Following subsequent design changes carried out by Dr. Alistair Mackenzie in 1928, time has proved that Morris wasn’t far wrong in his assessment.

Apart from the splendour of its location, Lahinch has gained wide recognition for its charming idiosyncrasies, not least among them being the goats, whose outline adorns the club’s crest. It is said that the goats of Lahinch act as weathermen for all golfers. If the goats are grazing on the dunes, the weather will remain fine but if they venture towards the shade of the clubhouse, then prepare for a spot of rain. Lahinch possesses two of the most famous holes in Irish golf in “Klondyke”, the 5th and “Dell”, the 6th. The par 5 Klondyke demands a drive into a scenic valley from where one plays a completely blind second shot over a monstrous dune to a gently rolling green some 200 yards further on. Dell on the other hand is one of the most photographed and controversial short holes in golf. The green on this par 3 is nestled between two steep dunes and is completely blind from the tee. The line here is over a stone moved along the face of the fronting dune, while the outcome can be very much in the lap of the golfing gods. 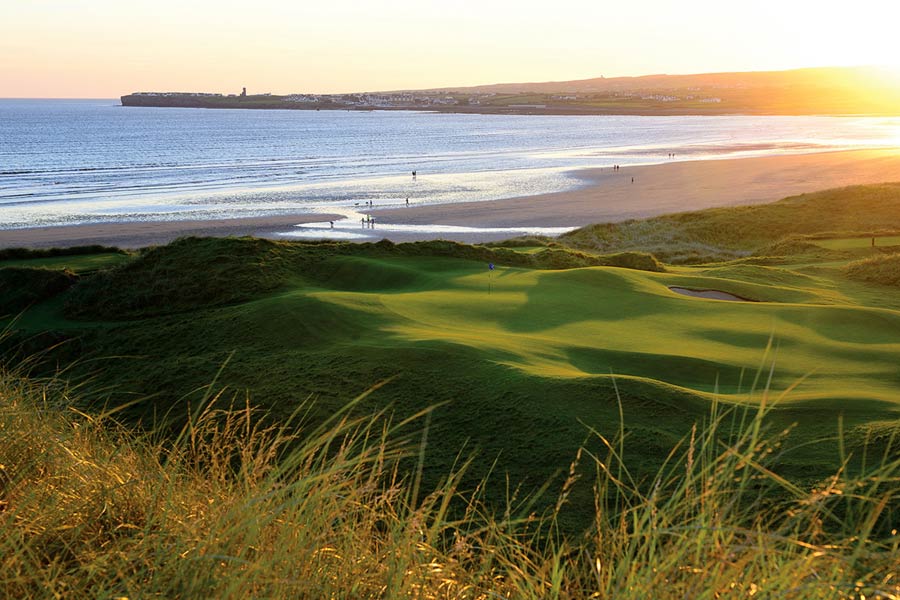 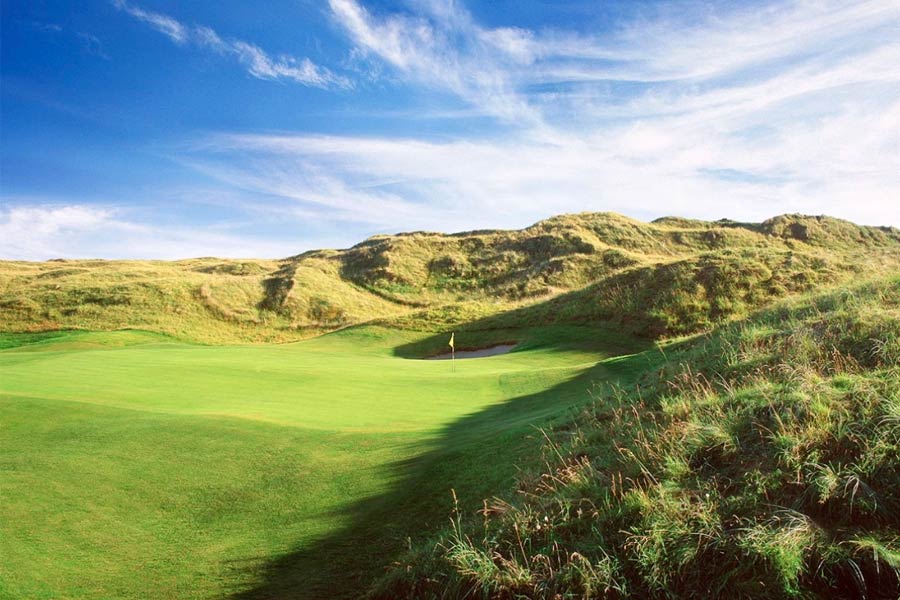